See for yourself why Morocco’s popularity is only growing as more people find out about it, and why everyone who visits leaves understanding the obsession. 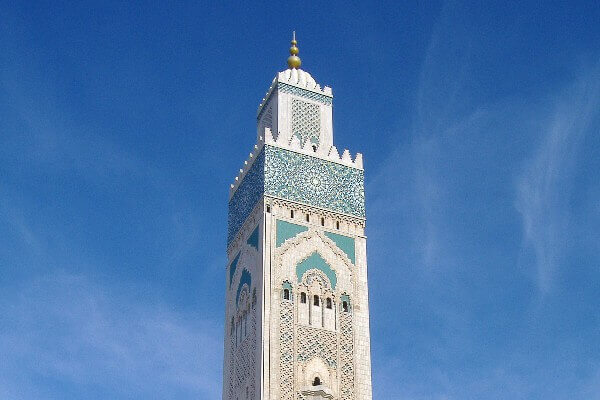 This tour may be only a week long, but it will leave you with memories that will last a lifetime! It all begins when you land in the Mohammed V International Airport in Casablanca. You’ll make your way through customs and see the professional, English-speaking driver ready to take you to your hotel. He’ll soon become a friend, helping your trip to go smoothly and showing you the real Morocco that not all tourists get to see.

You’ll be taking in everything as you make your way to the hotel…is your first impression of Casablanca that it is more modern than you expected? Or maybe you are noting the lovely djellabas that the older Moroccan men and women wear…

If you arrive early enough in the day, your driver will take you to the Hassan II mosque. This is one of the most famous landmarks in Casablanca, as intended by its namesake, King Hassan II. The Atlantic Ocean, over which the mosque sits, complements the turquoise and green coloring the minaret. Since the minaret is one of the tallest in the world, you’ll have to squint to see the intricate patterns.

When you walk inside, you’ll be able to see this art up close and you’ll catch your breath at the decorated archways and detailed architecture. Ask your guide about the religious symbolism…it’s present in the beauty. 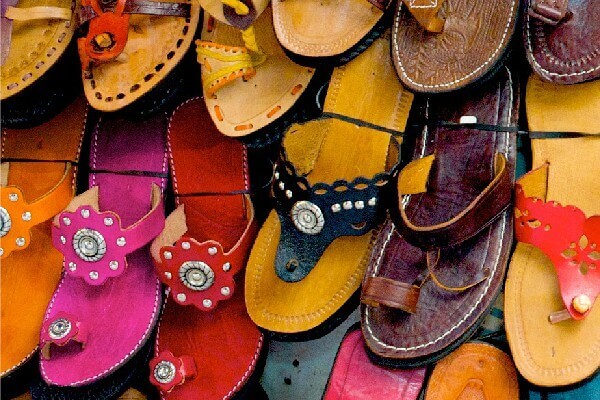 Today you will drive to Fes, which is a significant city in Morocco’s heritage. Look out the window and watch the scenic landscape as you make your way to Rabat, which is where you will stop for lunch. Rabat, the capital of Morocco, is a modern city that is located on the beach. Rabat is not much of a tourist city, which gives it a down-to-earth feel.

While in Rabat, you will be able to stop at a local restaurant and try the delicious Moroccan food…it’s always best when it’s not found in a tourist restaurant but at a local place. Drive by the residence of Morocco’s king or take a walk down a palm tree lined boulevard…

As you drive into Fes, you’ll come through a modern New City before you reach the Medina, founded in the 9th century. This medieval city doesn’t allow any cars inside, so you’ll see donkeys carrying loads in through the large ornate gates. It’s packed with over 9,000 small streets, some of which are so small that you’ll have to walk through single file! Imagine stepping into a way of life that has been preserved for centuries…. 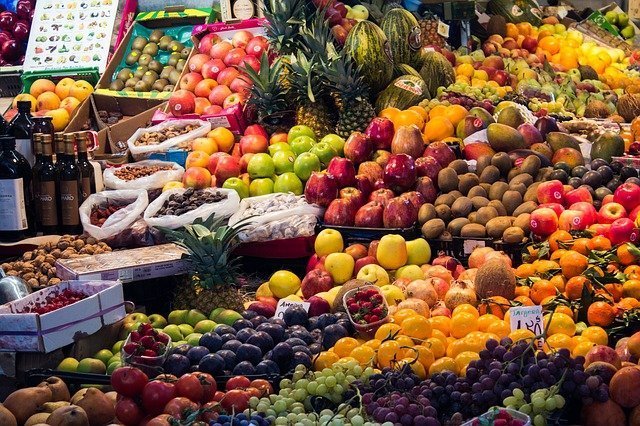 You’ll be glad of your professional guide as you make your way through these twisting streets. Imagine passing open air markets piled with colorful fruits and vegetables. A few shops down, a woman is picking up chicken from the butcher to bring home for tagine…

You’ll visit the weavers. Picture yourself ducking into a small dark doorway and ending up in an airy courtyard filled with the sound of looms clacking. On the wall are rainbows of scarves and blankets, soft to the touch. Imagine climbing up what seems like a hundred stairs to look out over the impressive tanneries, trying to mask the strong smell of the rich dye with your small mint sprig.

Not only will your guide explain the history of the stops you make, but he’ll also give insight into the deeper cultural beliefs that you might not always see at first.

You’ll get to stop for lunch at one of our favorite restaurants where they’ll wow you with their flavorful food. Count the number of different salads you taste…you’ll be amazed!

A comfortable night in your riad or hotel will be welcome after this full day of adventure. 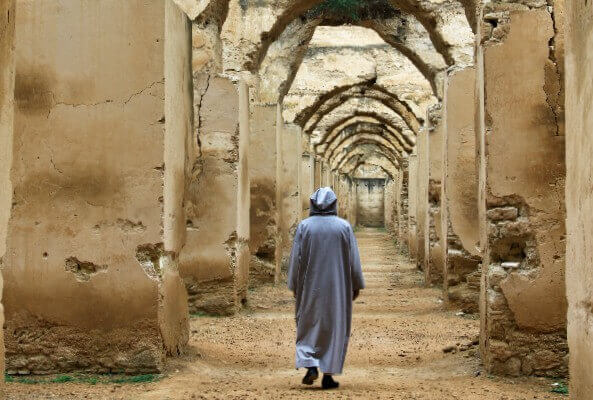 Imagine seeing remnants of the Roman Empire before your very eyes…

When you visit Volubilis, you’ll see storks nests on top of tall roofless pillars. The old mosaics are worn with time but it is easy to see the color and design that used to be so magnificent. Your guide will bring these 2,000-year-old ruins to life in front of you, showing you the old olive oil press and pointing out where different buildings were located.

You’ll also get to catch a glimpse of Moulay Idris, one of the most holy cities in Morocco. Named for the Muslim saint and founder of Fes, this town is pretty with its white walls and prominent green roofs.

Meknes, another imperial city, will be your stopping point for lunch. You’ll drive around the city and marvel at Bab Mansour, built to honor Sultan Moulay Ismail. This gate is decorated to perfection with zelij tiles and detailed engraving. You’ll also stop at the Royal Stables of Moulay Ismail and the ancient granaries. 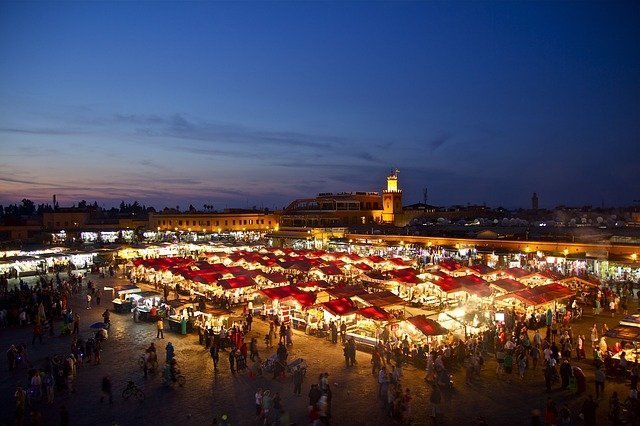 Today will be the longest drive of the tour, but the route from Fes to Marrakech is filled with beautiful sights. You’ll drive up into the Middle Atlas Mountains and wind along the base of the High Atlas Mountains. Take in the natural landscape…it will be a wonderful change of scenery! Ask your driver what he thinks you shouldn’t miss in Marrakech.

A fun way to see the city is with a horse and carriage ride. Imagine the clip clop of the horse’s hooves on the road, the breeze and Marrakech sights rolling past you. You’ll pull up by the Jma El Fnaa, the big square of Marrakech, which is full of activity at almost all times. If you go in the evening, you’ll be able to see it when it is most energetic.

Stalls of food are set up everywhere, with vendors calling out their specialties. Fresh juices, dried fruit, hot meals…your stomach will be content if you allow yourself to sample the treats. If you are feeling bold, take a picture of yourself holding the snake from the snake charmer! Your friends will love to see the evidence. 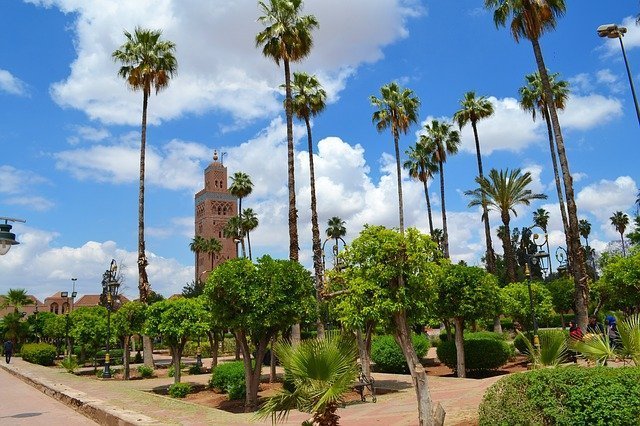 Today you’ll find out more about why Marrakech is a favorite to travelers all around the world. Its popularity is only growing as more people find out about it, and everyone who visits leaves understanding the obsession.

Your guide will take you to the Koutoubia mosque, the largest mosque in Marrakech. Lean back to see how it reaches into the sky…

Imagine walking through the souks in the medina. Some of the most notable stalls are the ones filled with lanterns, sending out glittery flecks of colored light. Silver, brass, spices and soft material surround you as you pass through the stalls, wondering which one to stop at.

Your guide will take you to the Bahia palace, the old residence of the grand viziers, Si Moussa and his son, Bou Ahmed. Its name means “brilliance” and you’ll understand why as you explore the gardens and salons. The Saadian tombs are another must-see of Marrakech. These tombs, forgotten about for years, are where many from the royal Saadian dynasty are buried. This might be the most beautiful burial site you’ll ever see…the tombs are covered in flawless zellij patterns and lavish artwork. 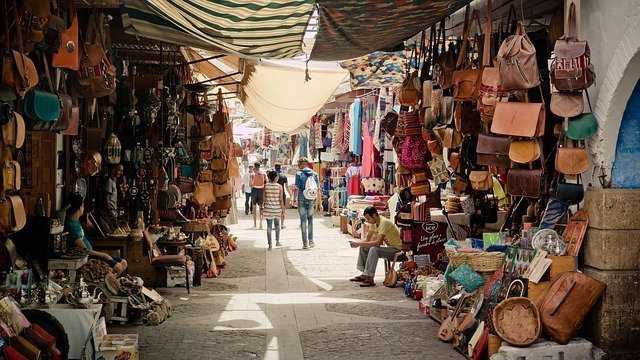 This morning is your last full day in Morocco, but it is a relaxed one so you can do all that last minute shopping or exploring you wanted to do! Go pick up a lantern for your house back home, sip a cup of orange juice, or return to see if that shopkeeper would finally budge on the bargain you wanted.

When you are ready, you and your driver will head towards Casablanca, where your fantastic trip began only a week ago.

As you drive to the airport, you might find yourself surprised at how much you are going to miss Morocco and the new friends you made here.

We hope you have a safe trip back, and you are always welcome to return to this country that now holds a special place in your heart.

NEXT STEP → CUSTOMIZE YOUR MOROCCO TRIP

Because we live in Morocco, we can offer you the best help in planning your Morocco trip! Complete this short form below and get in touch with a Morocco Expert to customize YOUR tour:

* All prices are in US Dollars, per person. Prices based on 2020 tours. There is additional 10% fee for tours including the dates between Dec.20 – Jan.5. For single rooms, a single supplement fee will be applied.

"I love Morocco. It is a truly unique destination. Let's start planning your trip and I'll help you craft a one-of-a-kind experience!"
Brian - Morocco Specialist (on the ground since 2004) 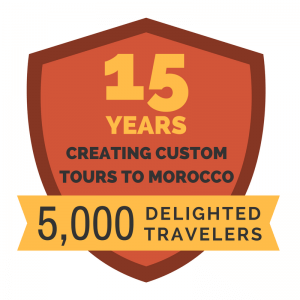 “From first phone call to last drop off, it was an amazing experience of being guided and cared for. You guys do exactly what you say you will do. I felt constantly surprised by the smoothness of the unfolding days…so many high points of the tour, but for me personally, it would have been the stark silence and beauty of the Sahara…”
Priya H.
(March 2019)